< >
In January 2010 we had a fair bit of Snow. Phil an I stopped the night out side Cemex Rail products in Washwood Heath Birmingham. When we arrived there, there was no one about, so we disided to have an hour playing in the snow. I will point out that Phil Lewis in his Scania did turn up a bit later, Phil took this photo after play time an just before we got in to the cab to have our tea.
Anyway did I say play for an hour? well!! about 3 hours later we had made........
A snow gopher...... Phil then set the camara up on the timer cuz he wanted to show the scale of it.

We had built it right out side the main entrance to the factory.

Oh it did get a lot of attention in the morning. Everybody seemed to know straight away who had built it. How was that then? he he he.

It was late afternoon on a snowy 30th of November when Phil an I was delivering a load of grain to a grain store near Newark. After tipping our load we was then told by Mark Adams to head for Welbec colliery, that's in Nottinghamshire to collect a load of coal an take it to Daw Mill colliery near Coventry. On our arrival we found the gates closed so we parked up there for the night. There was about 2 inches of snow on the ground. Phil done his paper work while I put the kettle on. Phil then made one of his creation... A tuna, cheese an hot dog sausages omelet. Not bad I must say. We washed up then climbed in to our beds to watch a DVD. Soon I dozed off. Next thing I know was Phil's alarm going off.

Phil climbed out of bed an pulled back the curtains to see if anyone was in the weighbridge. Phil burst out laughing. I climbed out of bed to see whats what. I could not believe what I saw. Overnight about 12 inches of snow had fallen. Phil an I looked at each other an.......... went back to bed. We got up about 8 o'clock, Phil phoned the yard. Lee who works in the office laughed an told Mark. Mark apologised for sending us there. I put the kettle on an Phil popped out to take this photo. Phil started to clear the snow so I measured up to the height of the fall, Just my size. I'm about 15 inches by the way. 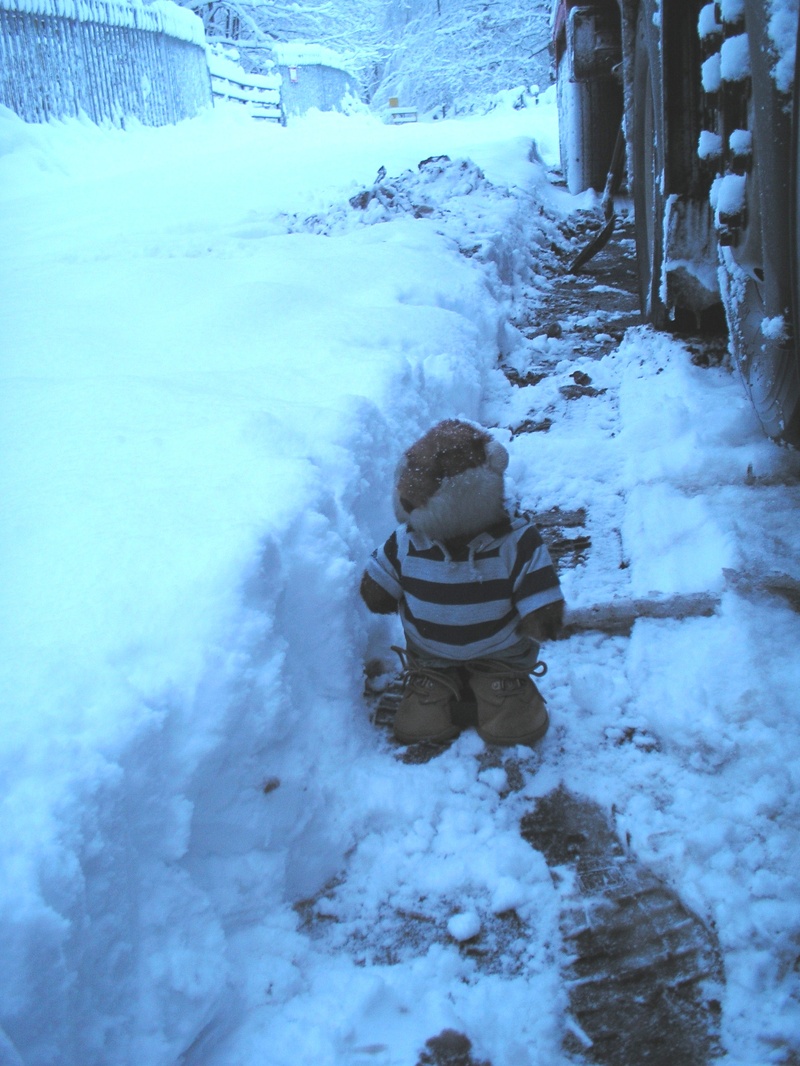 Phil cracked on. The plan was to move the lorry back in stages. 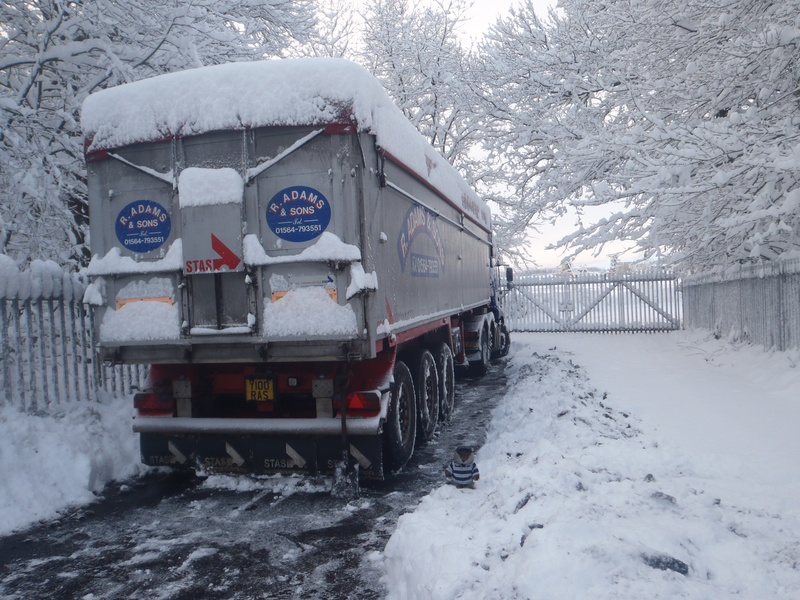 A panoramic shot looking back up the drive.

A clearer photo of the height of the snow. Phil moved the lorry back until it started to spin. 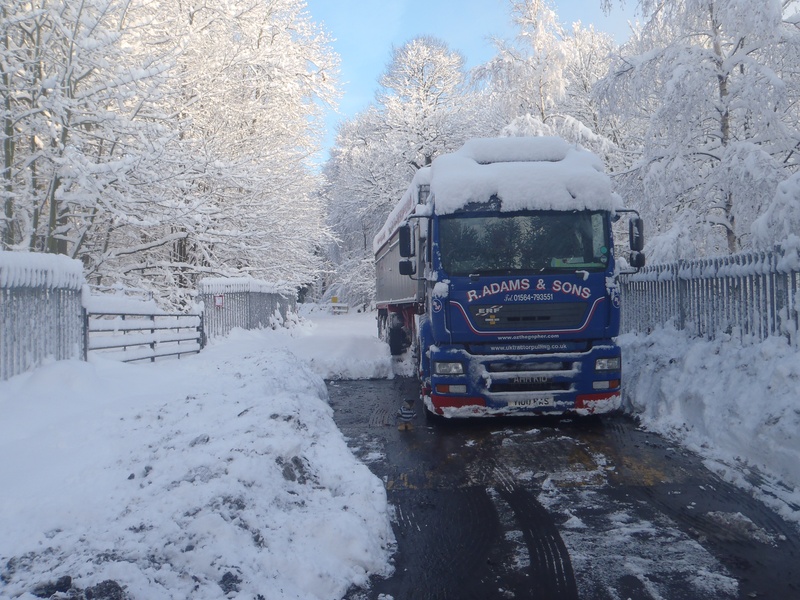 Well.. not much but its a start in the right direction. 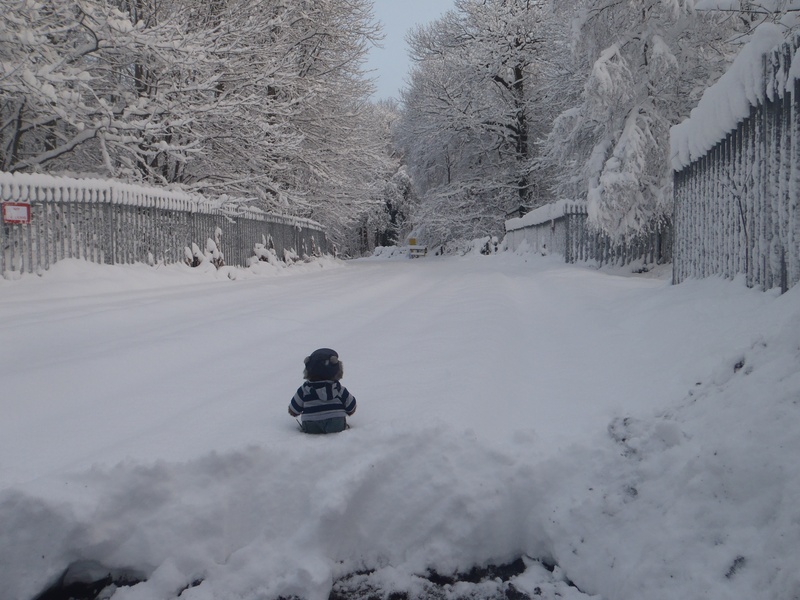 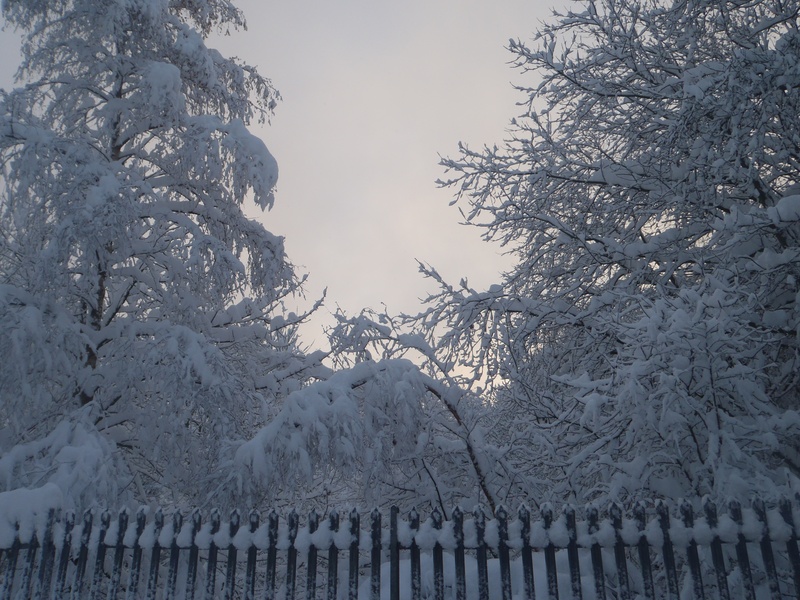 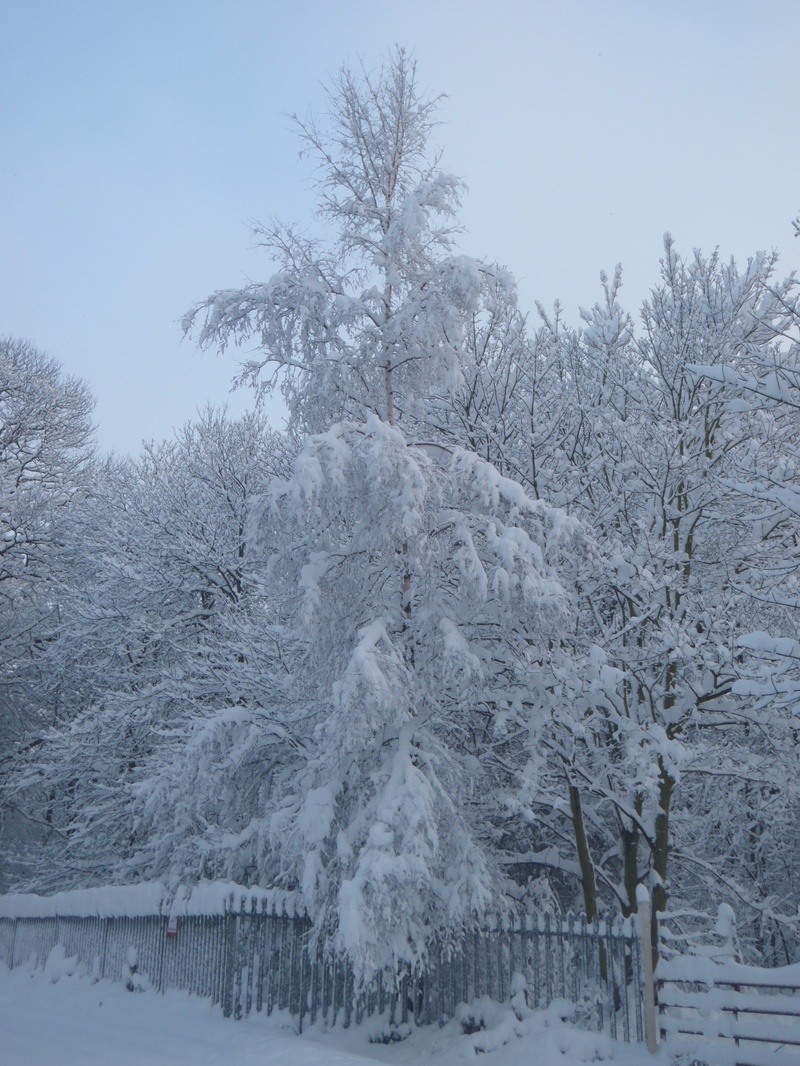 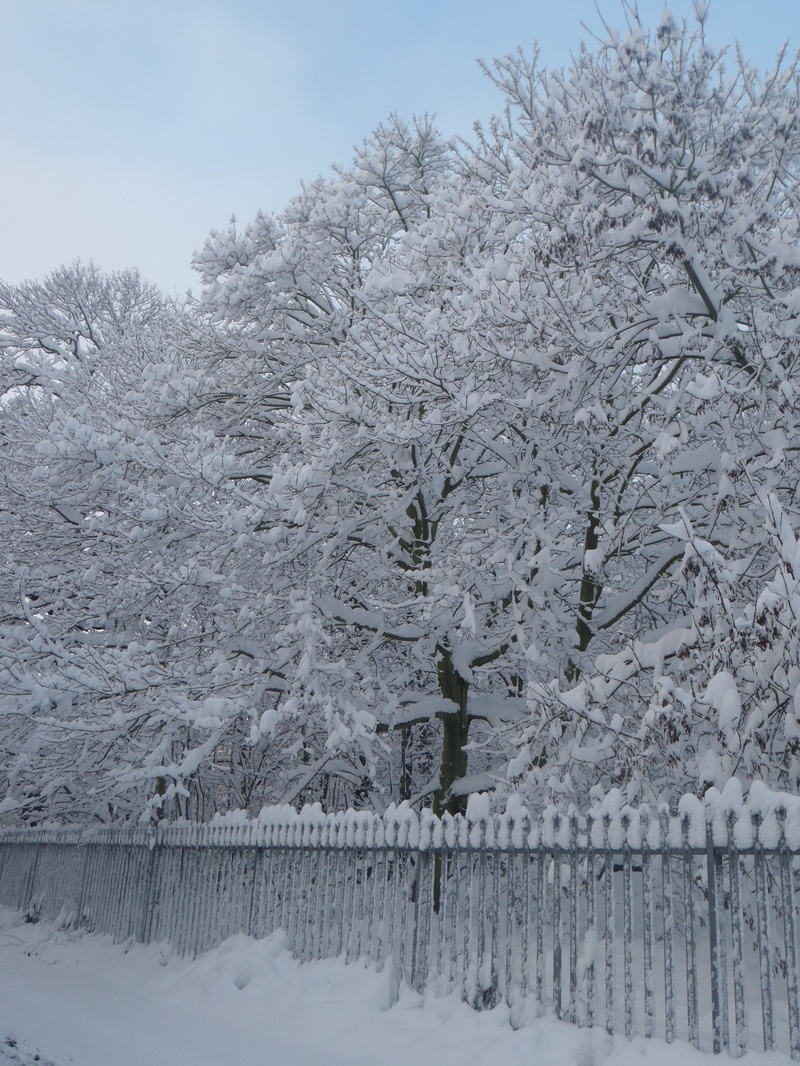 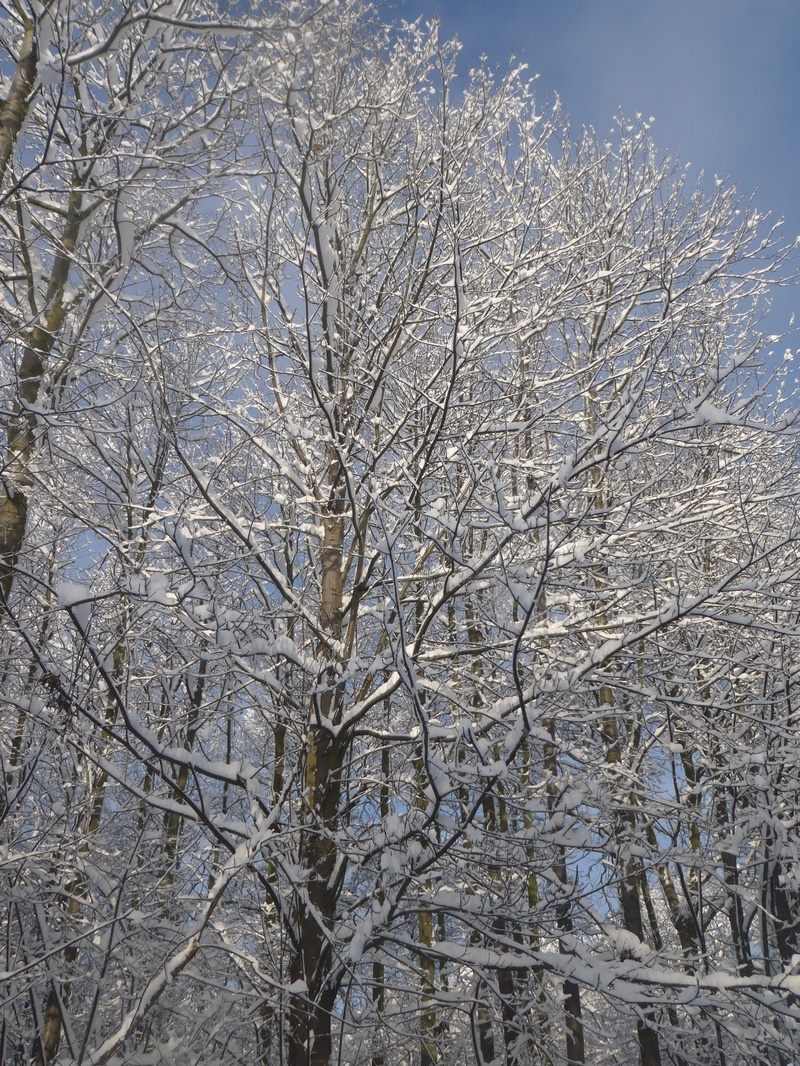 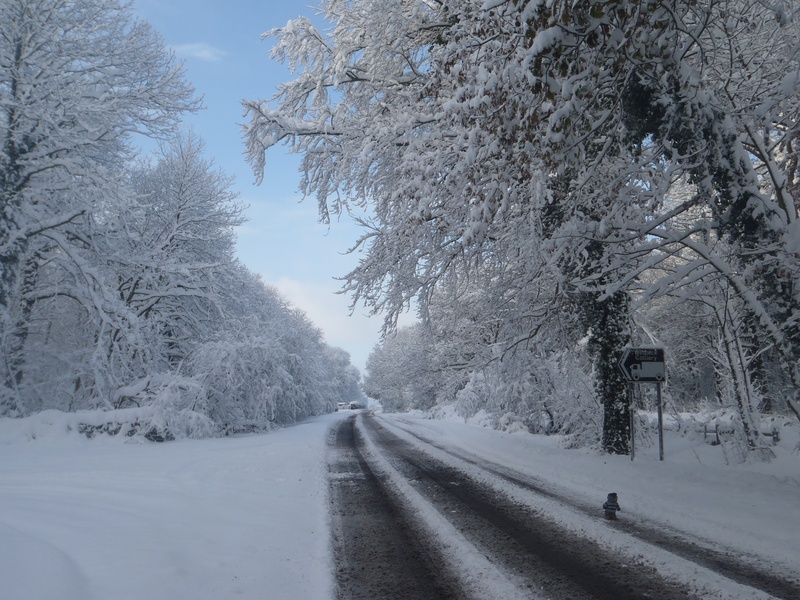 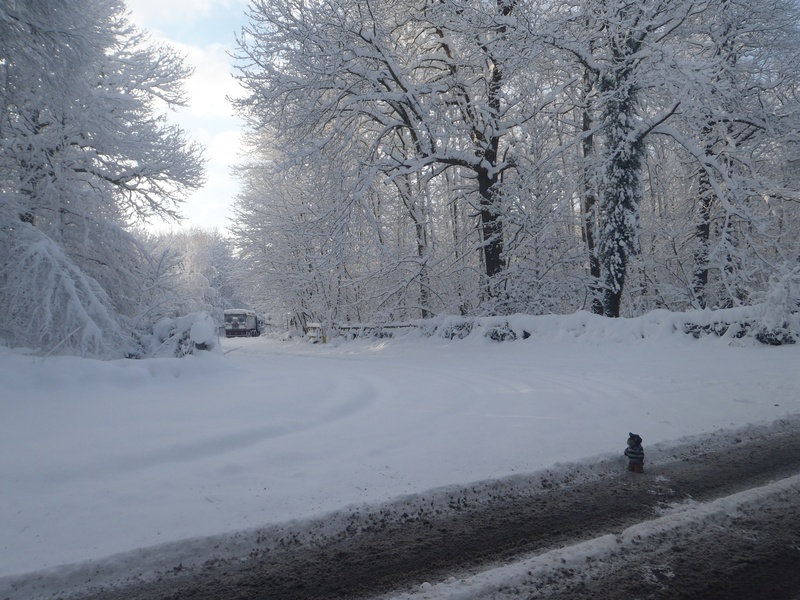 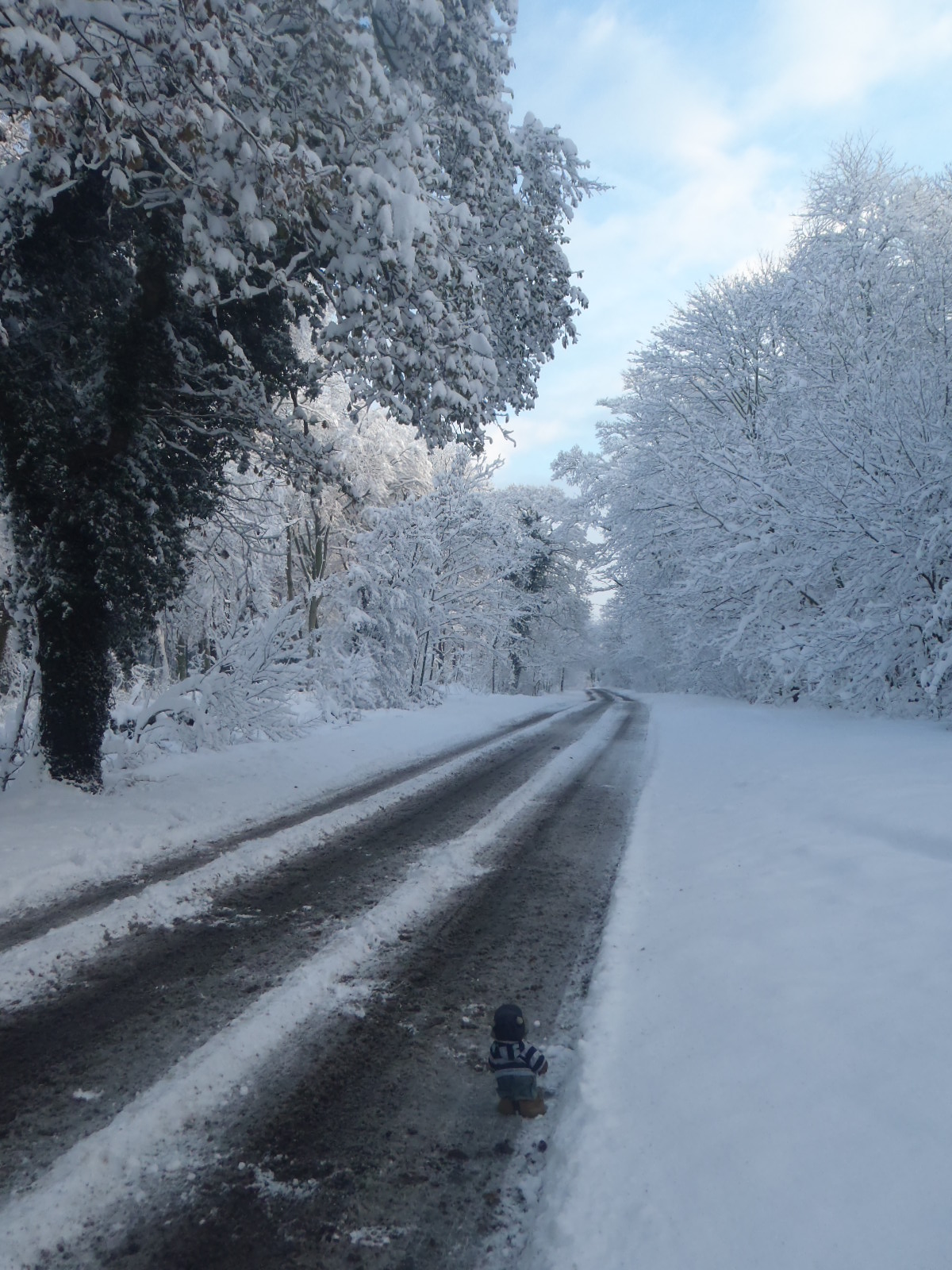 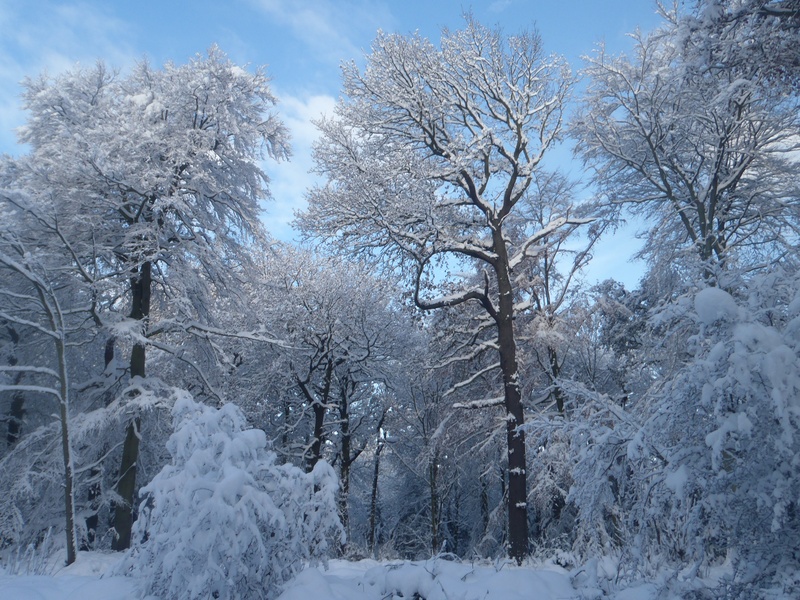 You can see how bad it looks from the road, a lorry pulled up, we thought the driver would see that the snow behind us hadn't been disturbed an clock that we had been there overnight. BUT THEN!! we could not Adam an Eve it when the lorry pulled in off the road an drove up behind us. The driver got out.. nearly slipping over! approached us. Phil told him the colliery was shut, then asked him why did he pull in. The bloke said "Funny enough this happened to me the other day! 100% CLOWN! Phil then had the great pleasure in saying to him.. "well you better start digging yourself out then.... again!" Phil climbed into our lorry an put the kettle on. 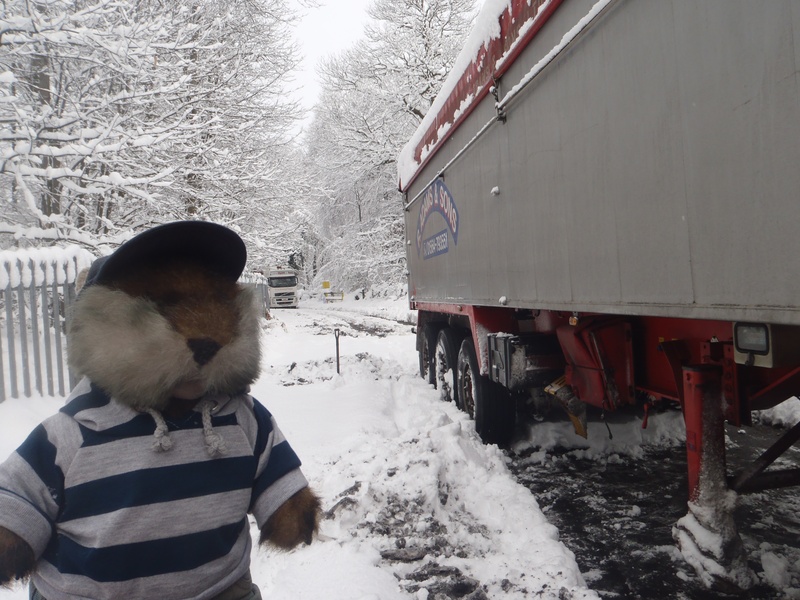 While waiting for tea to be made, I thought I'd make myself a snow man. 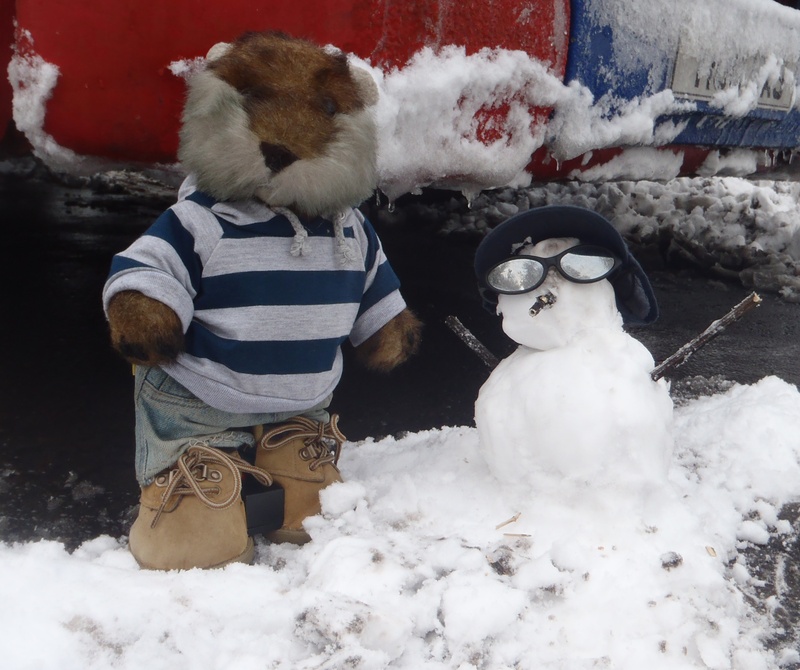 After about an hour an a bit he got close to getting out. 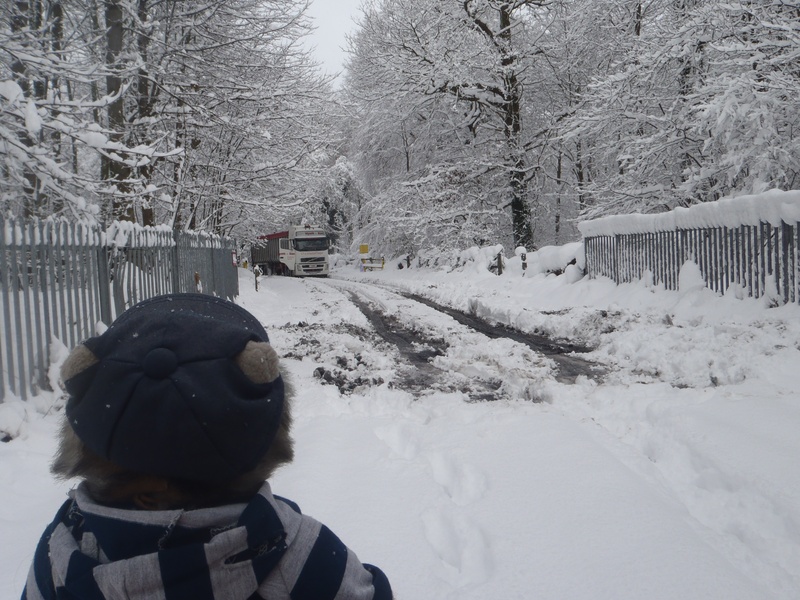 So Phil cleared the snow between the back of the trailer to where the other lorry started off from. 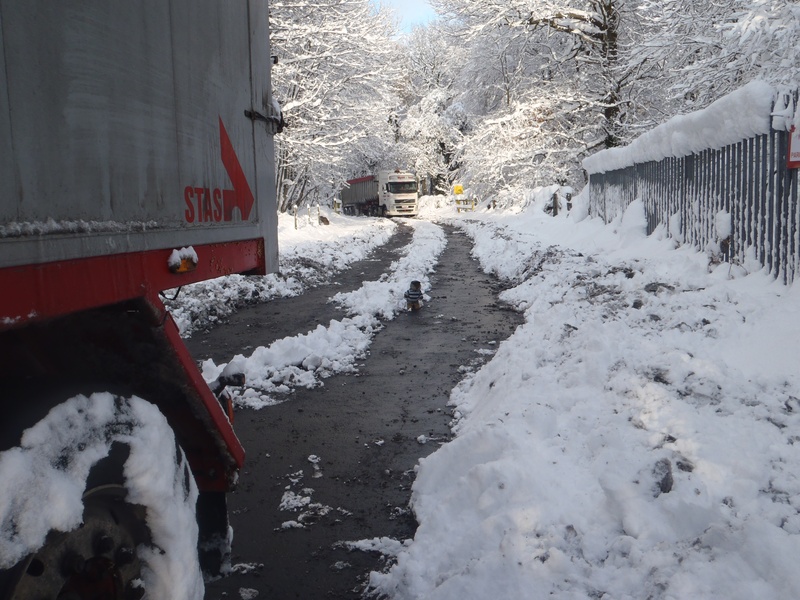 Phil then cleared out the compacted snow from the other blokes tracks.  BYE BYE MATEY... Thank Fred hes gone, time for us to move. Really thinking about it, it was a blessing in disguise. It saved Phil a lot of snow shifting, cuz matey did it! THANKYOU..... 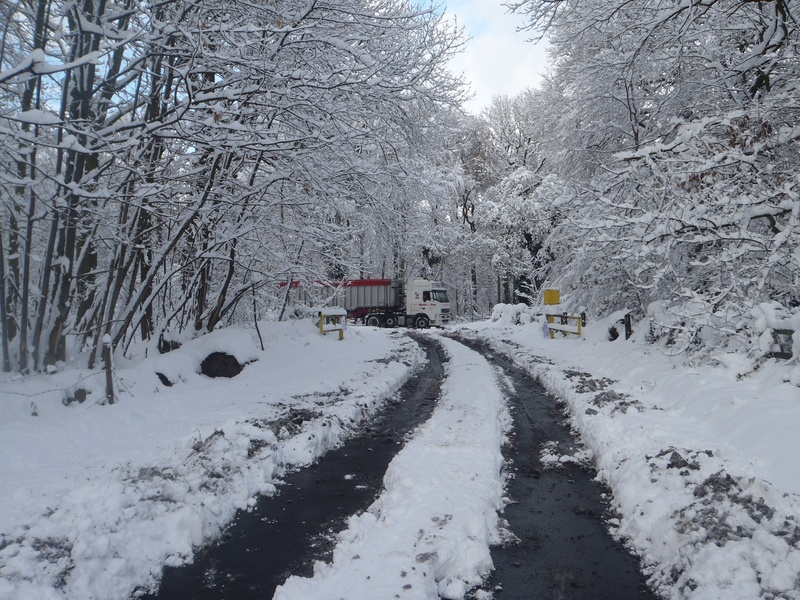 Just a smigin more an we will be clear. 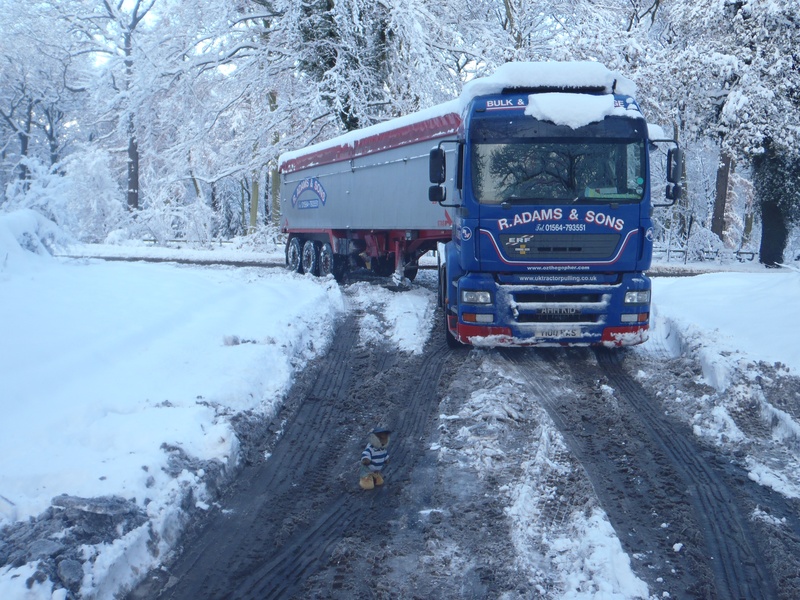 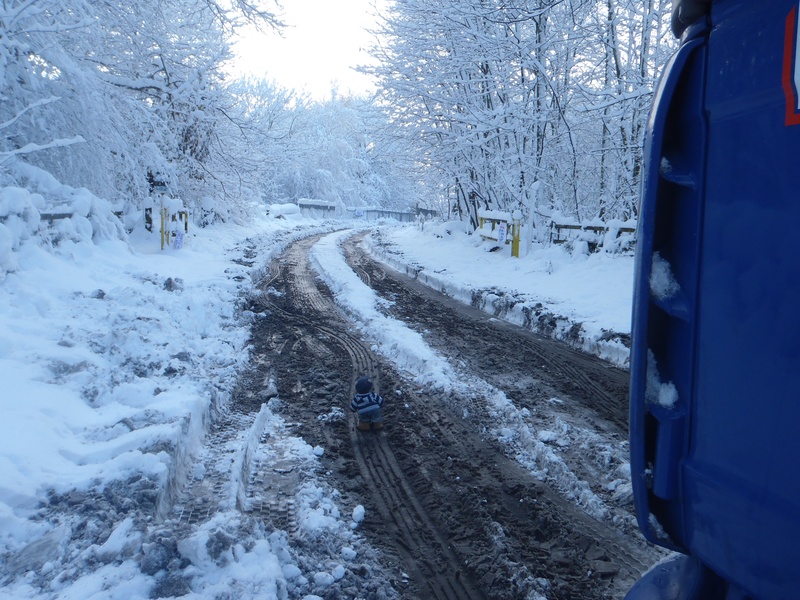 Safely out on the road. 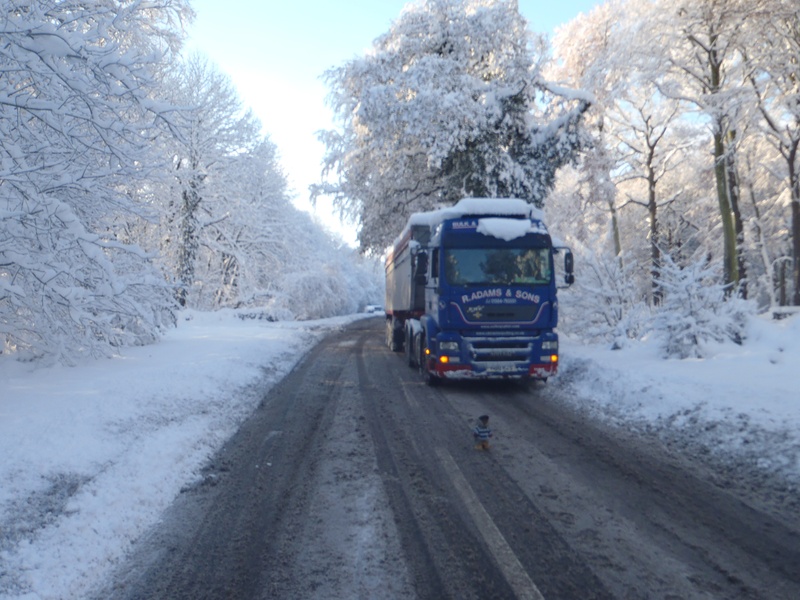 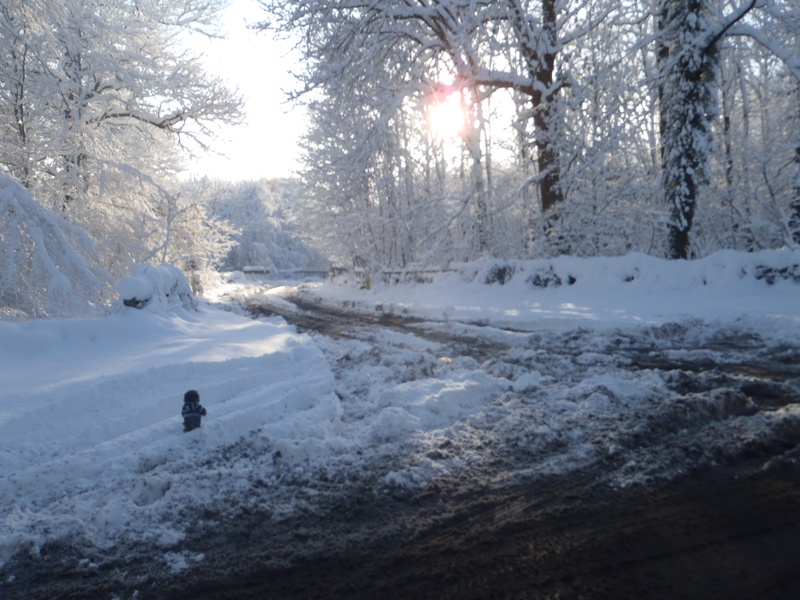 Ahh but what about the snow on top of the trailer, it would be a bit dangerous to all other motorist when driving along, as it is funny to say....  it'll fall off a back of the lorry. 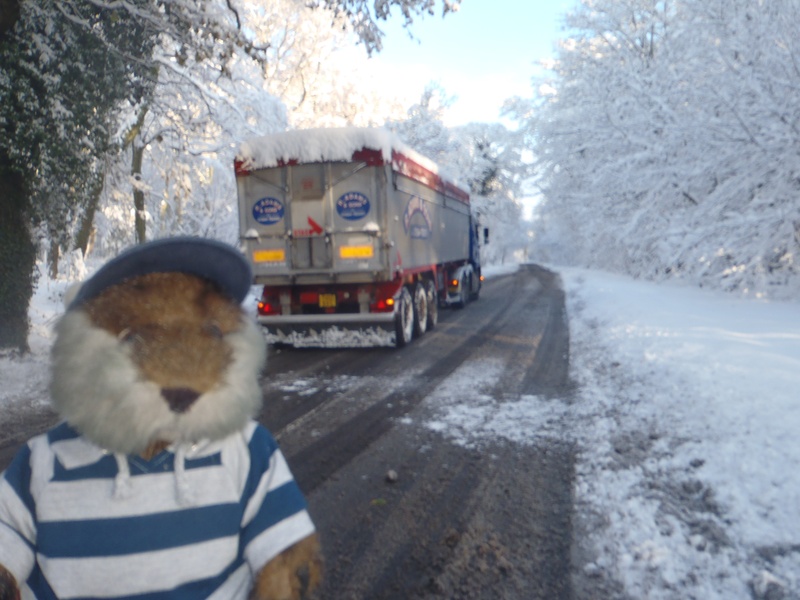 Being a tipper trailer....NO PROBS!! 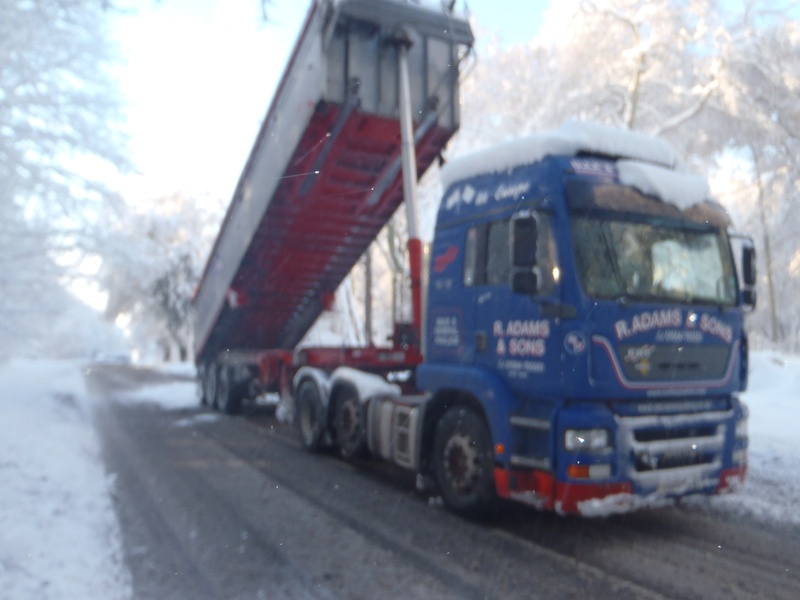 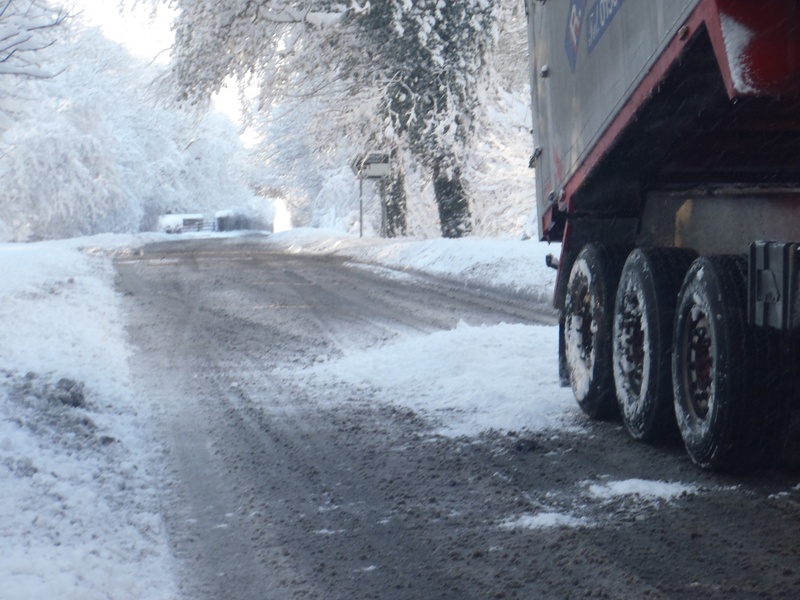 From getting up at 8pm, we was ready to roll at a couple of minutes to 2pm,

GREAT! just in time for the Archers!